The Textual Reliability of John's Revelation

If you were to read a copy of Homer’s Iliad (originally written around the mid-7th century BCE)[1] the text or translation you would likely be using is based primarily on a 10th century CE complete text.[2] It could also be based in part on some earlier quotations of Homer’s work by Plato, Aristotle, Herodotus, and others, as well as on some fragmentary papyri dating from the 3rd century BCE to the 7th century CE.[3] Further, there are many variations between the medieval texts and the earlier Homeric papyri, which is why to this day many “modern editors find the multiformity of the papyri and early [Homeric] quotations disturbing.”[4]

In spite of textual history separating our most complete text of the Iliad from the original by about eighteen hundred years, the Iliad as it existed in 1871-1873 (separated from the original by over twenty-eight hundred years) was accurate enough for amateur archaeologist Heinrich Schliemann to use to help locate the famous city of Troy, once believed to have never existed, now believed to have been inhabited from about 3000 BCE until sometime in the 13th century BCE.[5]

In the writings of the first century CE Jewish war veteran and historian Josephus we learn much about Jewish territory and rule during the first and second centuries BCE and into the first century CE, as well as a good deal concerning the many internal and external conflicts which eventually led to war with the Romans and to the devastation of Jerusalem in 70 CE. Josephus also tells us about remote locations like Masada, and details about what took place there from the siege wall the Romans built upon natural bedrock (and for which evidence was excavated in the 1990s[6]), to the number and use of lots by those who committed suicide rather than risk being captured by the Romans.[7]

In spite of these ancient accuracies from these ancient texts, the best available manuscripts for Josephus’ account of the Jewish war with the Romans date from the 10th – 12th centuries,[8] about a thousand years after the account was originally written, with the earliest fragment for this account dated to the late 3rd century.[9] By comparison with both the Iliad and Josephus in terms of its textual history, “John’s Revelation”[10] is supported by several early Greek papyri which all date within two hundred and twenty-five (225) to two hundred and fifty (250) years, to as early as one hundred (100) years from the date of the original writing of Revelation.[11] Also among the available papyri are P85 (4th century) containing Revelation 9:19-10:2, 5-9, and P43 (6th/7th century) containing Revelation 2:12-13;15:8-16:2.


4th Century Codex Sinaiticus Showing Revelation 2:19-20
(with punctuation and with corrections by a second hand) 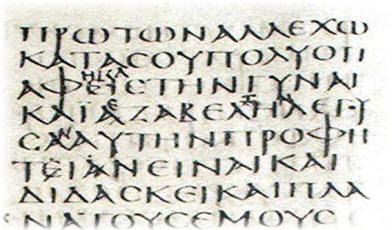 John’s Revelation may at times be put into a different class or category from other New Testament books because it is not included in some important early New Testament texts. For example, the Old Syriac (Curetonian and Sinaiticus [late 2nd – 5th centuries]) does not include John's Revelation, nor does the Syriac Peshitta version (early 5th century).[12] (But the 6th century Syriac Philoxenian/Harclean version does include Revelation.) Perhaps more important, John’s Revelation is not in one of our best New Testament witnesses, the 4th century Codex Vaticanus (B).

However, while it would have been nice to have available today a witness to John’s Revelation from this excellent New Testament text, John’s Revelation is not “missing” from Codex B in the sense it was never included; we simply do not have it as part of the remaining portion of Codex B.

Yet, while this gives us one less witness to the text of John’s Revelation from our main uncial New Testament manuscripts, the extent of the remaining support from a good number of early and later witnesses to its text should give anyone sufficient confidence to believe we have a reliable copy of John’s original Revelation for use today, even if it is not the actual copy he wrote.

Each time I consider the reliability of the text of John's Revelation, though it is much different than either the Illiad or the writings of Josephus in terms of its content, two things stand out as well: 1) It is unclear whether John's Revelation was originally written or received in Greek; however, 2) the Greek text of Revelation we have today is based on a good amount of important early papyri and other credible, ancient texts, not to mention the many quotations of John's Revelation in the writings of numerous Christians from the second century CE forward which I have not here discussed.[13]

The excellent textual and historical testimony for John’s Revelation is most evident when it is compared with other ancient Greek works, such as those by Homer or by Josephus, whose writings come to us from the same quarter century or so period as John’s Revelation (70 – 100 CE).

Indeed, if these writings with their comparatively limited textual history come to us with much content fit for use in defining and in reconstructing parts of our past, then perhaps the reliability of the text of John's Revelation will do the same, or prove beneficial in other ways as a reliable text and reference to early Christianity. If nothing else, we have good reasons to believe the text of John's Revelation is more reliable, textually, than other reasonably reliable, non-biblical, historical writings.

[1] See M.S. Silk, Homer—The Iliad, Second Edition (Cambridge: Cambridge University Press, 2004 [1987]), pages 3-4, who notes the dating of the Iliad must be based on several factors since “there is no contemporary information about its date either in absolute terms or in relation to other dateable events.”

[5] For a brief but informative online review of the history of Troy and its rediscovery in the 19th and 20th centuries by Schliemann and others, see this presentation about “Troy” (last accessed March 11, 2013) by the University of Cincinnati.


They then chose ten men by lot out of them, to slay all the rest; every one of whom laid himself down by his wife and children on the ground, and threw his arms about them, and they offered their necks to the stroke of those who by lot executed that melancholy office [Whiston, The Works of Josephus (Hendrickson, 1987), Book 7, Chapter 9.1].

[8] See the listing of the main manuscripts for The Jewish War here.

[10] This is the inscription (Apokalypsis Iōannou) of the book in Sinaiticus ('aleph), Alexandrinus (A), and Ephraemi Rescriptus (C). For other inscriptions see Phillip W. Comfort, New Testament Text and Translation Commentary (Carol Stream, IL: Tyndale, 2008), page 809; Bruce M. Metzger, The Text of the New Testament: Its Transmission, Corruption, and Restoration, Third, Enlarged Edition (Oxford: Oxford University Press, 1992), page 205. The New Testament book of Revelation comes to us as a Christian work apparently by one of Jesus of Nazareth’s original followers, “John,” written sometime from the later middle part to the end of the first century CE.

[12] Also, other New Testament documents are not included in the Peshitta version, including 2 Peter, 3 John, and Jude.

[13] The earliest explicit references to John's Revelation appear to be in Chapter 34 of Clement's First Letter (late first century CE) and in Chapter 3 of the longer version of Ignatius' Letter to the Smyrnaens (early second century ?), in the Fragments of Papias (60 - 140 CE), and in Chapter 81 of Justin Martyr's (105 - 165 CE) Dialogue with Trypho. See also G. Mussies, The Morphology of Koine Greek as Used in the Apocalypse of St. John: A Study in Bilingualism (SNT 37; Leiden, Brill: 1971), pages 37-38.
Posted by Greg Stafford at 11:56 AM