Spiders have many incredible features, not the least of which is the strength and design of its web, and all of which indicate intelligence and intention, not accidental mutation.
Consider just one of the spider's features: Fangs. 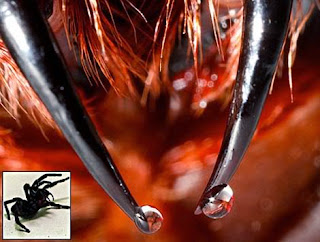 Spider fangs clearly show a design perfectly suited for its capture/kill ability which helps control insect population and ensure the spider's own survival. Further on the evident design of spider fangs, here is a quote from a recent article about spider fangs:


The hollow, conical shape of the spiders' fangs gives them nearly optimal stiffness per unit volume — a measure of their resistance to deformation — making them ideally suited for piercing prey. The fangs are a composite of protein and chitin, a carbohydrate molecule found in the shells of many insects and crustaceans, whose microscopic structure is well suited for its purpose, the results suggest.--Tanya Lewis, "Why Spider Fangs Are Nature's Perfect Needles," LiveScience (May 27, 2014).

In fact, and as the above article goes on to suggest, spider fangs are so perfect they "might inspire scientists to develop better injection needles and other medical devices." So what we humans can or have made so far, with all of our technology and experience, still does not equate to what a spider's fangs can do.So while the writer also repeatedly describes spider fangs as something which "evolved in nature," everything about spider fangs indicates just the opposite, namely, an intelligent, intentional design.
Accidents like spider fangs do not happen; they do not evolve from non-fangs or from something which is not already made to be what it is. In fact, the last mutation I saw, other than in recent (fantasy) X-Men movies, was about as useful as a wet towel coming out of the pool. Consider, for example, this description of a physical mutation (with underlining added):

In other words, mutations are defects, not indications of progress or advancement within a species, but usually signs of degeneration and loss of optimal performance; mutations never, ever lead to the development of a brand new species or a different family type of creature when they do occur, neither do they lead to a better-developed feature (such as spider fangs) of an existing creature like spiders. Therefore, describing something so perfect as spider fangs for what a spider does to survive and to better its environment as having unintelligently "evolved" is nonsense; it has no scientific basis, at all.Yet, we humans design things similar to spider fangs (for example, injection needles), showing such devices are often the product of intelligent, intentional design.
Of course, even our intelligence cannot (yet) match that which we see in the spider's fangs; hence, we see the interest in Ms. Lewis' article to copy or to replicate as best as we can what it is spider fangs can do. That alone should tell us there is someone behind the design and the purpose of spider fangs, indeed, behind it should tell us the same thing about every single living creature since they all have similarly designed, well-suited features which allow them to survive, to thrive, and to contribute to its environment.
Intelligent design is scientific, as is the belief life only comes from preexisting life and, therefore, scientifically, "life" must be considered eternal.
How so?
Because intelligent design and life coming only from preexisting life both happen all the time, every single day, for everyone to see. New things are intelligently designed by humans and life continues to only come from preexisting life, in the case of every known life form, with no exceptions, other than those proposed by science apart from any actual evidence,but which propositions often provide evidence against the very conclusions they advance in the name of science. Spider fangs are just one example of this.